Who Is the Tea Party?

At best, many people have just shrugged and said, “I don’t really know” or at worst, gritted their teeth and said, “Oh, I don’t want any part of them!” When asked why, they never know the answer. Well, I can tell you the answer.

It’s simple. The power base, the Washington Elite, discovered that a groundswell movement back in 2008 was more effective than any movement since the 1960’s. But the difference between this movement and the tumultuous 60’s was not a repudiation of government, but rather it was a questioning of government actions.

Specifically, in 2008, you’ll recall that the massive Bank Bailout occurred, when we, as a country, were asked to fork over $700 Billion from our national treasury to bail out banks. There was no audit, no accounting, just the bill to the American Taxpayer. It made us take notice, to ask questions, to become alarmed about the financial health of our nation. Many of us lost between 40% and 50% of our life savings in 401K plans as the stock market plummeted that September. And I might remind those who aren’t aware of the details, it was during the last administration. Another difference between 2008 and the 1960’s was the Internet. People began blogging, checking internet sites, chatting with folks across the nation and sometimes across the backyard fence. And in this technological age, groups formed throughout the country, consisting of Independents, Democrats and Republicans, and they wanted answers from our Representatives.

I remember polling people around me at these local events, asking them their party affiliation. They were a surprising cross-section of our nation, actually forming a moderate faction. They remembered that the Boston tea party was a protest against taxation without representation. And the name caught on because essentially, this is exactly what happened. We were “Taxed Enough Already.” The Tea Party groups soon realized that the reason the government had gone awry was that the Constitution, our working Document, had been ignored during this Bailout debacle and for decades prior.

Gradually, government was becoming more bloated, less efficient, more centralized, meaning States had less power – in direct conflict with the founding of our country. D.C. had become a “club” of sorts, with powerful elites calling the shots. The people realized that our great Document began with the words “WE The People” to remind us that WE are the government. It’s not the government’s government.

In the next year, the Tea Party backed those candidates who wanted to get back to basics, the Constitution, our founding document. That was and still is the Mission Statement of the Tea Party. It also explains the big turnout in the 2010 elections, putting people in Congress who had those same goals in mind. But wait, that caused a tremor in those ruling “establishment” elites in Washington! These multi-term politicians realized that the People were taking their power. I remember seeing Town Hall meetings on You Tube with everyday folks posing questions to their representatives that they’d never heard before. This was new stuff! The people are asking what we are doing!

What to do? Denigrate the group, call them troublemakers, racists, a Republican plant by Big Business…anything to take their effectiveness from them. And in the ensuing years, many disparaging comments about the Tea Party came from both parties in Congress. Sound-bites like “They are blocking legislation…They are extremists bent on shutting down government…They want to eliminate government altogether…they want to destroy everything we are working so hard to do for the people” were heard far and wide. With the help of the mainstream media, these accusations were so effective in their denouncements, the Tea Party itself is now thought of by many as a “far-right crazy wing” of the Republican Party! The group that had originally formed from both parties and Independents, now had the People believing that their own movement was as radical as those ’60’s student movements! Those old enough to remember those demonstrations will remember that they were violent and destructive, their only goal had been the tearing down of our government. That is not the goal of the Tea Party. It wants our government to be working for its citizenry, not for the Lobbyists, or Big Business, Special Interest groups or powerful Unions.

That is why it has backed and continues to back candidates with those goals in mind. The Tea Party had started without a political thought but soon realized that it was impossible to struggle with an over-regulated government bureaucracy in our daily lives without paying attention. Politics matter. It affects our children, their children, and generations to come. So, in closing, I’d like to answer the question. The Tea Party consists of people you see every day, the lady in Walmart, the guy at the gas station, someone in your church group, your gym. We are the citizens of this country, wanting the best for our nation, wanting our government to work to keep this nation strong and as great as it has always been!

By Marilyn Snyder
Stick and stones may break my bones but names will never hurt me. Not true, say those who take offense at every slight, gibe, criticism, or disagreement. They whine about what they call “hate” speech.
We have become a country obsessed by words. Every pundit, reporter, government official, and citizen is fanatically scrutinizing every word, verbal or printed. And every word seems to be problematic to some person or group.
Despite our Constitutional right, free speech is an endangered “species,” hounded to near-extinction by the “I’m offended” movement.
For example, if you oppose the policies of a black president, you are called a racist. That effectively ends the conversation. However, if you oppose the policies of a white president, you are, what? Normal? Impartial? The conversation can continue because the disagreement is political rather than racial.
If you are opposed to the Common Core education system imposed by the federal government, you are called ignorant. There’s a conversation stopper! You may have researched the topic thoroughly, but because your conclusions conflict with its promoters, you are reprimanded, denounced, and censured. 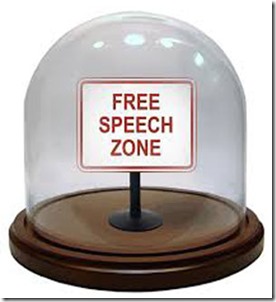 Once upon a time these words by Voltaire were on the front page of my town’s daily paper: “I disapprove of what you say but I will defend to the death your right to say it.” A very lofty objective which reflected the Constitution and Benjamin Franklin’s idea that “Whoever would overthrow the liberty of a nation must begin by subduing the freeness of speech.”
Yet despite the Constitution prohibiting the making of any law abridging the freedom of speech, “hate” speech laws abound.
Detractors say “I not only disapprove of what you say, but I will drive you from your job, destroy your reputation, attack you in every form of media, and badger you to death if you have the audacity to utter words which I find to be ‘hateful.’ “
According to USLegal.com, hate speech can be any form of expression regarded as offensive to racial, ethnic and religious groups and other discrete minorities or to women.
Now you know-the only group you can’t possibly offend by your speech is white males!
But can freedom of speech be half free? That is, you can say whatever you want but only as long it doesn’t offend someone? Anyone?
Ira Straus in the National Review said that the primary ground and origin of hate lies in the very subculture that criticizes “hate” most often, because it is uses “hate” as a label for smearing those it doesn’t like.
Indeed, the average citizen is probably not all that sensitive to what the various activists call politically incorrect talk. Those who whine about being offended are a minority of activists pursuing their own agenda and using “hate” speech as a tool. And they are the ones who make the headlines.
One of the best ways to shut down a debate is by acting angry and offended. For example, your saying that you oppose illegal immigration is offensive to some, so pro-illegal immigration activists call you “hateful” and the debate ends. To label the Michael Brown grand jury decision as correct is offensive to the “Hands up” activists, so no “national conversation” about race issues can take place.
Justice Oliver Wendell Holmes of the US Supreme Court said, “The principle of free thought is not free thought for those who agree with us but freedom for the thought we hate.”
Sadly, there is no “right” to live without being offended. Indeed, my right to offend, that is, to speak freely, is actually far more important than your right not to be offended. My right to free speech is upheld by the Constitution. What do you claim as your defense? That your feelings are hurt?
Despite our basic Constitutional guarantee that free speech is protected by the First Amendment, a variety of “anti-everything” groups make it impossible for citizens, government officials, pundits and leaders to speak freely for fear of retaliation. Freedom of speech cannot co-exist with the thunderous onslaught of the “I’m offended” group. The occupants of “the land of the brave” have to reject that fear and work for universal freedom.
We can start by standing alongside conservatives and tea party members who support the Constitutional right to free speech. We must repudiate the invidious logic of “your right to free speech ends where my right not to be offended begins.” Indeed we must champion a euphonious culture of free speech.
Otherwise the day may come when your grandchild sits at your knee looking up at you with complete trust in you, and asks: “What was it like to have freedom of speech?”

Marilyn Snyder has a Master’s Degree in Systems Analysis from USC. She is a member of the Redlands Tea Party Patriots. Contact her at PatriotMarilyn@gmail.com.

Here is the First Posting of Opinion and Commentary of Local Patriots. We encourage our members to contribute to this section.