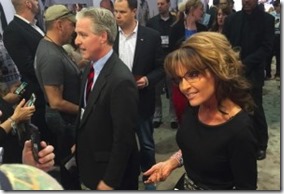 Palin on New GOP Majority: Its Not Just the Patriots Who Are Dealing with Deflated Balls

Former Alaska Gov. Sarah Palin declined to speculate on a potential 2016 run Thursday at the 2015 SHOT Show in Las Vegas, but she did offer the GOP some free political advice. We caught up with Palin as she was promoting the second season of her show, “Amazing America,” which airs on the Sportsman Channel Thursdays at 9 p.m. ET.

“I’m not going to talk politics except to say the GOP had better go on offense. Man, they are not going to win any game on defense,” she told TheBlaze. “Being in the majority there in D.C. — we’re blowing it if we just bend our back.”