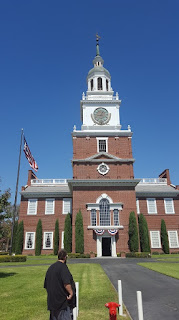 “Don’t forget that pure democracy is a form of collectivism — it readily sacrifices individual rights to majority wishes. Since it involves no constitutional bill of rights, or at least, no working and effective one, the majority-of-the-moment can and does vote away the rights of the minority-of-the-moment, even of a single individual. This has been called ‘mob rule,’ the ‘tyranny of the majority’ and many other pejorative names. It is one of the greatest threats to liberty, the reason why America’s founding fathers wrote so much so disparagingly of pure democracy.” — Bert Rand

Pure democracy is a destructive ghost that only appears momentarily between the rise of republics founded in liberty and the last gasp of freedom as it alters into an oligarchy ruled over by despots and authoritarians who claim they only have the interest of the common good and the collective on their dark hearts.
When speaking about the original intent of the United States Constitution, the concept of Natural Rights, or the true meaning of what limited government truly is to folks who have bought into the collectivist philosophies of the Democrat Party’s progressivism (a.k.a. collectivism, socialism, statism, utopianism, liberalism, communism), you might as well be speaking a different language.  They have been convinced that individualism is the problem with society.  They call it greed, and selfishness when in reality the motivations that accompany individualism are monetary incentive and personal enrichment that, in the long run, benefits the society as a result of the accomplishments of the successful individual.

While I appreciate my community, and I am definitely a part of it, as an individual it is my personal contributions that enrich it, or not; not some pre-planned agenda concocted by twisted minds who swirl around in some kind of hive mentality.  One size does not fit all, and some bureaucrat in Washington D.C. does not know what is best for our States, counties, cities or neighborhoods.  Localism is the key to liberty, and individualism is the engine that fuels prosperity.  It is the sum of contributions, the sum of the different, unique, and individual aspirations that make life magical, and worth living.  Government has no place to interfere.  The collective, if we are all about the collective, is drab, bland, and gray.  But, with our uniqueness blended in, and our personal and individual contributions weaved into the whole of society, it becomes colorful, innovative, and it blossoms with liberty.
— originally posted at Political Pistachio Conservative News and Commentary