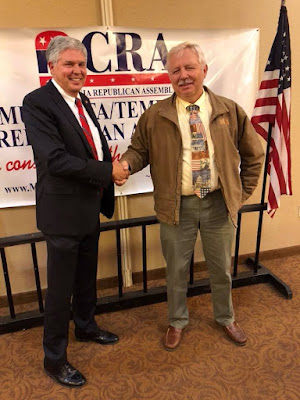 The Murrieta-Temecula Republican Assembly, one of two Riverside County units for the California Republican Assembly, held an endorsement convention last night.  Melissa Melendez, the Republican incumbent for California’s 67th Assembly District who has held her seat since 2012, and has been a consistent winner and popular assemblywoman of her district which includes Lake Elsinore, Murrieta, Menifee, Winchester, Canyon Lake, Lake Mathews, Wildomar, and parts of Hemet, won the MTRA’s endorsement unanimously; as did Marie Waldron (assembly district 75, Temecula and parts of northern San Diego County, also in office since 2012), and Duncan Hunter (U.S. House of Representatives California District 50).  Ken Calvert (U.S. House of Representatives California District 42) won his endorsement almost unanimously – there was one abstention.

After the endorsements of the incumbent republicans, a candidate forum for the California Assembly Seat in the 42nd Assembly District (Pass Area, Desert Communities, Yucaipa, Redlands, San Jacinto and a portion of Hemet) currently held by Chad Mayes took place.  The incumbent Republican Chad Mayes was invited, but did not attend, nor did he send any representative from his campaign.  He had also been disqualified because he had not sent in his questionnaire on-time.  Mayes has held the seat since 2014, and was the minority leader in Sacramento until a wave of Republican Party rebuke for his vote to extend Cap and Trade took place.  Riverside County’s Republican Party Central Committee was among a long list of committees who called for Mayes’ removal not only from his leadership position, but from holding office.  Two Republican candidates have emerged to challenge Chad Mayes (along with two democrats, and one Green Party candidate).

Gary Jeandron, a retired police officer (former Police Chief of Palm Springs), former school board member, and small business owner (marriage and family therapist), has 33 years experience in law enforcement, and has signed a “no-tax” pledge in relation to his current campaign. Jeandron’s political history in the terms of holding office includes time on the Palm Springs Unified School District board, elected in 2010, of which he resigned about six weeks before the 2014 election after he moved outside the boundaries of his seat.  Electorally, this is Jeandron’s third try at an assembly seat.  He competed for the Assembly in 2008 against V. Manuel Perez and lost, and finished third in the 2014 primary behind Mayes.  In 2010 he also challenged State Senator John Benoit for the Riverside County Board of Supervisors and lost.

Andrew Kotyuk, who, due to unforeseen circumstances, was unable to attend the CRA endorsement convention, last night, and instead sent his Campaign Manager Nathan Miller, who is also vice-chair of the Riverside County Republican Party Central Committee, is a businessman and current member of the San Jacinto City Council.

Yours truly, Douglas V. Gibbs, was the moderator of the forum, during which I provided 3 questions (regarding Cap and Trade, the 2nd Amendment, and the immigration issue) followed by a half-dozen questions from the audience.  Candidates were given three minutes to give an opening statement, and three minutes for each question.  A one-minute rebuttal was available should any candidate directly challenge his opposition, but at no point during the evening was the rebuttal rule necessary.

After the final endorsement, an ordinance designed to enable California cities to opt-out of California’s sanctuary status law (S.B. 54) was presented and voted on.  The MTRA voted unanimously to support the ordinance, which has been presented, thus far, to six cities.  I am the author of that ordinance.  If you would like me to send you a copy of it, please email me at constitutionspeaker at yahoo.com.